The deep plane facelift from your best Charlotte surgeon 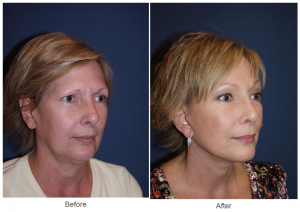 The basics of the facelift

Although facelifts were performed last year in the United States alone, no two facelifts are any more alike than any two faces. Some patients develop wrinkles sooner than others. Patients who smile a lot tend to develop one set of wrinkles, while patients who often frown or scowl develop a different set. Every facelifts is tailored to the individual patient’s face and aging pattern. They are often combined with a brow lift, neck lift or eyelid surgery, as well as filler or injectables, to make the whole face appear younger. Given that every surgery requires a certain period of recovery time, it’s best to get as much done at one appointment as possible.

The deep plane facelift is one of the most common types of facelift. Another kind of facelift is the SMAS (superficial musculoaponeurotic system) lift. Many surgeons favor this lift, but the disadvantage is that it can easily be overdone, creating what is often called a wind-tunnel effect. A deep plane facelift is harder to perform, but it looks more natural and lasts longer. It elevates the soft tissues of the midface and lower face, letting the face look younger without looking pulled. After a deep plane face lift, you should be able to return to normal activity in about two weeks, but it may be several weeks before the swelling goes down enough that your face looks like you want it to.

Charlotte’s Dr. Sean Freeman has developed a procedure called the SignatureLift, for younger patients or those who have already had face lifts. It’s a lot like the “weekend face lift” that many other surgeons use. Unlike a deep plane face lift, it can be performed under sedation rather than general anesthesia, and the recovery time is much faster — most patients can get back to normal activity after only a few days. The effects aren’t as significant or long lasting as they would be with a regular facelift. A SignatureLift requires examining the skin of the patient’s face and judging its thickness, texture and elasticity, looking over the wrinkles and finding the best place to make the incision.

Dr. Freeman is Charlotte’s best facial plastic surgeon. He has devoted himself completely to facial plastic surgery since 1988 and has been certified by two different surgery boards, the American Board of Otolaryngology (head and neck surgery) and the American Board of Facial Plastic and Reconstructive Surgery. He can do anything from laser tattoo removal to port wine stain treatment. If you live in or near Charlotte and are interested in looking younger, schedule your appointment today or ask for an online consultation for a discount on the consultation fee.